The lecture “Post-Colonial Theory and Distribution of Wealth” by Prof. Dr. Michael Zerr and Ms. Phan took place as a part of the Summer Academy 2018 at the Karlshochschule International University. Students, practitioners and scientists in the Summer Academy brought together their own thoughts and worked on tasks, learning and collaborating together to experience something new! Are we living in a post-colonial society? Where can we find the effect of colonialism nowadays? Prof. Dr. Zerr said that there is no right or wrong answer, but it is always interesting to try to find answers to those questions. 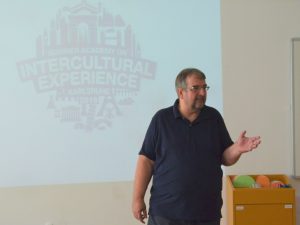 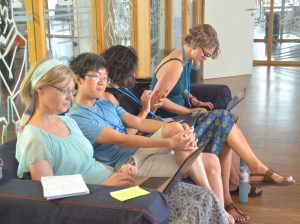 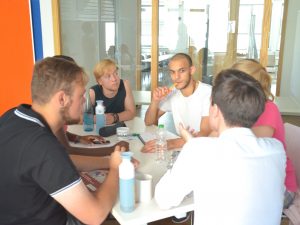 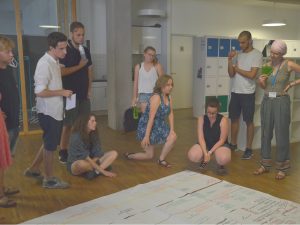 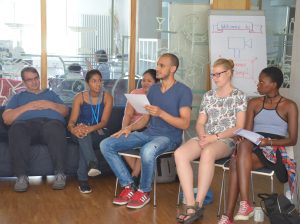 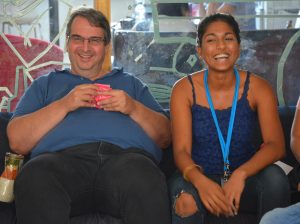 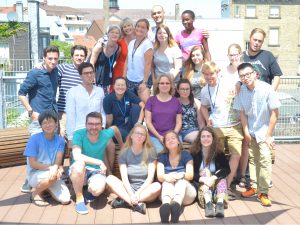 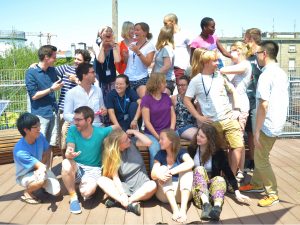 What is Post-Colonial thinking?

The Summer Academy on Intercultural Experience has been organized by the Karlshochschule International University and InterCultur gemeinnützige GmbH since 2010. This year, the classes were organized into two tracks, Intercultural Cooperation and Intercultural Integration.  On 26th of July, there was an interesting lecture about “Post Colonial Theory and Distribution of Wealth” by Prof. Dr. Michael Zerr and Ms. Phan. Prof. Dr. Michael Zerr has been recently elected as the new president of the university,and Ms. Phan is a lecturer who did her Master’s degree at Karlshochschule. Luckily, I had a chance to participate in the lecture and experience the atmosphere of the Summer Academy.

There were many participants from different fields and backgrounds such as students, practitioners and NGO workers. At the beginning of the lecture, Prof. Zerr asked us to share our thoughts about ‘post-colonial theory’. We wrote down some keywords that came to our minds such as imperialism, orientalism, third world and racism. And then, we shared our personal experiences regarding post-colonialism. For example, one participant from Egypt shared her experience from her hometown that always the one who has a brighter skin tone is considered as a pretty girl. I also shared my story from South Korea that many people admire western culture and feel inferior about their own culture.

Ms. Phan introduced to us some famous post-colonial thinkers and their thoughts. She mentioned Stuart Hall’s concept of cultural representation. For example, there are some racial stereotypes about Asians from a Western perspective and that they are also less represented in mainstream media. According to Hall, power made us see and experience ourselves as an “other” from society. I could also relate  these ideas to my personal experiences, since I’ve also experienced first hand what is it like to feel like an “other” in European society.See beyond the curtain: Post-colonial thinking and case study

At the end of the lecture, we had a group discussion with one case study about fair trade products. It was regarding a British company in the stone industry which aimed to improve ethical standards and fair trade policies with their suppliers in India. Within the region where some of their suppliers were based, there were also issues with child labour and poor working standards. We discussed how to help the locals in India and run a business successfully. The case was way more complicated than my expectation since there are many stakeholders to consider. Is it okay to hire only adults if we can’t offer alternative jobs or chances to earn money for the local children? Is it a realistic solution? How about environmental issues? Who will be the target consumer for this company’s product? Many questions came up on my mind and it was very interesting to share my opinion with others.

Prof. Zerr said that there is no perfect answer, but it is important to think critically and consider many different perspectives. He especially said that Karlshochschule’s motto is seeing beyond the curtain which means to think out of the frame. For instance, we can easily assume that fair trade products are good. However, especially in this company’s case, the stone products which are produced and sold can be considered as a luxury good, mainly targeting consumers within higher income brackets. And for this business, many companies destroyed the environment and in some cases, used child labor as the means to produce the stones. So before we talk about the way how to run a successful business, we have to ask first whether this trade is politically correct or not.

There is something different in the Karlshochschule’s approach!

After the lecture, I also had a chance to talk to one of the participants, Jin-Soo from South Korea who is working in an NGO called Better World. He was personally interested in the educational approach in Germany and joined the Summer Academy lectures to experience the Karlshochschule’s education system. He said that he really liked the free discussion with people from all over the world and the way they teach. He said that it was impressive how students and lecturers could openly talk and argue in the lecture and it was very interesting to hear different ideas from diverse people. South Korea is more like a homogeneous society than Germany and the way of education in the university is more strict or hierarchal. He even said that I am lucky to have this opportunity since it is quite different from South Korea, which is also my home country.

Even if I joined the Summer Academy 2018 for just one session, I was quite inspired by the lecture and discussion I had with other people. Through the whole Summer Academy, participants can experience not only lectures but also a lot of activities such as role play, group activity to understand the meaning of diversity, integration and intercultural experience. It would be a good chance to the people who want to learn through a different lens and for those who admire some academic inspiration.

The Summer Academy on Intercultural experience is organized by the Karlshochschule and InterCultur gemeinnützige GmbH since 2010.

Exploring Karls: Intensive Weeks and IPRO
The COVID-19 Crisis and the Future of “Education for All”
Mental Wellness in the Time of Corona – A Wellness Blog Series with Professor Ella Roininen Part II
Inclusion, a brief introduction to the topic*