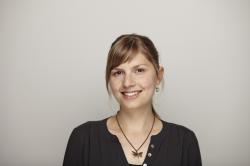 Kim Cattrall, 50 Cent and Studio Hamburg – quite a few celebrities turned up for the Mip Tv in Cannes. Students from Karlshochschule too, mingled with the celebrities and 11000 other participants from over 100 countries. By Elisabeth Brauch and Katrin Bauer.

The Mip TV is the biggest fair for TV- and digital content. Every year, experts of the entertainment industry gather here. TV stations and producer expand their network, and the fair aids n the handling of co-productions, buying, selling and financing of entertainment products and content.   The whole world meets in Cannes – to stay up to date on future trends, global laws and to land good deals for their companies. It is about TV series: how to produce them, promote them and to sell rights for them, to get in contacts with producers and co-producers, to finance projects and to make contracts and contacts. Content from all genres and platforms is offered on the fair with screenings, show casings and speeches from experienced and successful CEOs from almost every big multinational company. May deals are made here that influence the programming of many TV stations worldwide. That is the Mip TV, and the reason that we, the course of International Media and communication management, had to go. What we had to expect sounded quite impressive: 11000 participants from 100 countries, 60 keynotes, 1600 exhibitors in 25 pavilions, 4000 potential buyers and 300 journalists. The fair was held in the “palais” of the festival and upon arriving on the 7th of April, we entered a whole new world.

We had to register and received an ID and a bag filled with useful little trinkets, a map of the fair became absolutely necessary, followed by a little tour over thefair. The first impression was: very big, very confusing. Well dressed ladies and gentlemen everywhere. Chances were high of getting completely lost. We were told that two other universities were represented in the fair, but we soon realized that the Mip TV was not exactly designed with universities and students in mind. We did not mind that, especially not after discovering that Kim Cattrall, aka Amantha from “Sex and the City” would be holding a speech about her new TV series “Sensitive Skins”, in which she would be the lead producer and lead actress. Kim was talking about her work and how the job of an actress is different from the job of a producer. The speech was over all too quickly, while we were still busy trying to take an acceptable picture of her.

After lunch we tried to make some contacts, which was not easy. We nervously approached representatives of different companies and, adding to the pressure of making a good first impression, had to seem open intelligent and charming and ask clever questions to keep the conversation going. That was quite exhausting, but after a while we got used to it and developed a little catalogue with questions that we could adapt to the situation. Time passed quickly and while we went back to the hotel, the others went to watch “The Honorable Woman” starring Hollywood’s Maggie Gyllenhall. The evening promised to be even better than the day! The screening of the series “Power” had been announced, starring Curtis Jackson, aka 50 Cent as executive producer. A talk about the series, its creation and the filming followed. A slight disappointment was the fact that 50 Cent did not come over to us to take a picture. That was, however, forgotten quite quickly, since the Mip TV Welcome Gala was waiting for us in the Hotel Marinez. Unfortunately we missed the buffet, we took a little tour through the hotel and danced till the early morning hours.

While Monday was completely dedicated to, Tuesday was all about our competencies in networking. The talks and speeches became more and more serious and our appearance more confident. We were now able to hold longer conversations and received companies’ business cards more frequently. A business card is not an internship, but it is a start. Among others, we talked to “Studio Hamburg”, who produces “Das Großstadtrevier”, “Rote Rosen” and the Til Schwieger-Tatorte. The lady we were talking to was very informative and told us all about their current products, the rights to which they were hoping to sell on the fair. In return for our avid listening, she asked about our course and our plans and goals for the future. When we said goodbye, we did not only get her business card, but also invited her to a Karlsgespräch and left a brochure about the Karlshochschule. Now we hope that this is a contact we can work with, and might eve get an internship in the summer or in the next semester. Our talk with “Red Arrow International”, a subsidiary of ProSiebenSat.1 Media went very similar to our talk with “Studio Hamburg”. “Red Arrow International” produces, among other series, “The Taste”, “Der letzte Bulle”, “Galileo” or the television movie “Die Hebamme”. The main focus was however on the US-series “Bosch”, which could be viewed on the video-on-demand service form Amazon in spring. “Red Arrow” is now trying to sell the rights to the series, and it is very likely that we will be seeing the series in German free TV. We really planned on a 10 min talk, but we ended up staying for 40 min. Red Arrow seemed very interested in attracting potential new employees. We expanded our collection of business cards and moved on.

We did not get this lucky with the ZDF. They were represented with a huge stand, but nobody seemed to have the time to talk to us. We found out that the afternoon was not a good time to get in contact. Most companies had their meetings in the morning and were done or closing in on the end – and wanted some peace and quiet on the last day.

What else we saw? For example speeches about 4K or Fresh TV in the grand auditorium: The newest television series were presented here – that is the Mip TV 2014 for you.

Das erste Semester
Interning in a business: How my university experience helped me manage
Storytelling and Change in World Politics
Mental Wellness in the Time of Corona – A Wellness Blog Series with Professor Ella Roininen Part II