“As a business economist I have always been equally fascinated and scared by the relationship between the human and the machine. Early business economists like Fredrick Winslow Taylor or the German Erich Gutenberg applied the machine metaphor when describing organizations. And even in the 21st century the machine is still a dominating metaphor. Only think about the business engineering movement trying to apply engineering methods to social organizations and also concepts like Lean and Six Sigma incorporate significant machine thinking.
Werner Kranwetvogel is a German film director and photographer, at Karlshochschule’s Summer Academy on Intercultural Experience he gave a presentation on Mass Games in North Korea respectively Democratic People’s Republic of Korea, which is the official name. While studying at University of Television and Film Munich (HFF München) he first saw pictures of the Mass Games decided to visit and to take his own photos from the show. This first series led to the pictures book ‘A Night in Pyongyang’, published by Nicolai, Berlin, which is the first book ever on this topic and the only one up to now.
Developing mass gymnastics is important in training children to be fully developed communist people. The idea is based on the philosophy of the German “Turnvater Jahn” and was later misused by many dictatorships, such as the Nazis or several communist regimes all over the world? A human in a totalitarian system shall acquire a revolutionary ideology and a healthy and strong physique. In North Korea mass gymnastics “play an important role in training schoolchildren to acquire these communist qualities. Mass gymnastics foster particularly healthy and strong physiques, a high degree of organization, discipline and collectivism in schoolchildren. The schoolchildren, conscious that a single slip in their action may spoil their mass gymnastic performance, make every effort to subordinate all their thoughts and actions to the collective.” Kranwetvogels says. His presentation was a fascinating trip to a foreign planet, thousands of people of one of the poorest countries in the world involved in a colourful, beautiful and exciting mass spectacle, a machine of thousands of human gear wheels, rendering a tribute to the North Korean Revolution.” 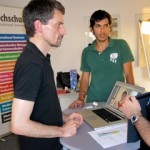 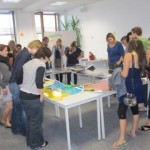 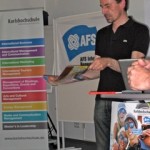 Have a look at the very impressing Mass Games pictures: http://www.massgames-pictures.com/

My Experience with Virtual Reality as a Student in the Module MELE (Marketing Elective)
Exploring Karls: Future-Day or "The Tribergers"
SENSE Project at the Karls: Make Sense and Use Your Senses
Diwali at Karls: Home away from home